On March 11, 2013, Heritage Toronto unveiled a Toronto Legacy Plaque to commemorate renowned composer John Weinzweig on what would have been his 100th birthday. The plaque will be placed at 599A College Street West, where Joseph Weinzweig had a furrier shop, above which the family lived.

John Weinzweig’s father Joseph came to Canada in 1908 following his arrest for his involvement with Jewish socialist societies in Poland. Joseph began a new life in Toronto, marrying his wife Rose Burstyn on May 27, 1912 and starting a family in the next year.

In The Radical Romantic (1994), Elaine Keillor explains that Joseph Weinzeig’s furrier business allowed them to gain some financial security, meaning “that music lessons were within the means of the Weinzweigs” (7).

The building at 599 College Street that housed the family business and home thus becomes an important site for celebrating John’s early musical education at the Workmen’s Circle Peretz School and the Harbord Collegiate Institute, and with piano and music theory teacher Gertrude V. Anderson.

Heritage Toronto and the Toronto Legacy Project's presentation of a plaque:

This plaque presentation is part of the John Weinzweig Centenary Project’s commemoration of the 100th birthday of the renowned composer.

This plaque was completed in partnership with the Toronto Legacy Project.

In this picture, we see Joseph Weinzweig in front of his furrier shop at 628 College Street West. 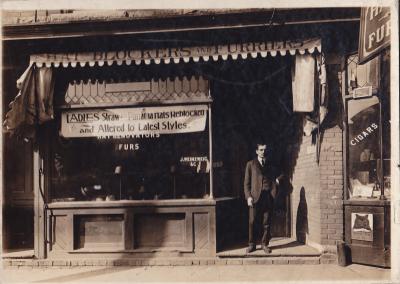